On the one hand, I always ask the same questions

Which begs the question – should our approach to starting a project be based on the type of project or on a generic set of questions aimed at understanding the problem to be solved (or the opportunity to be seized)?

I usually start my projects by trying to work out what is going on. So the first question I ask is “what is going on”?”.  But if I use those exact words I normally get a blank stare. So I usually ask what problem is being addressed or what opportunity is being explored to get a starting point.

Then I use my question compass to work out what is really going on. My question compass is a standard-ish set of questions I like to ask when first engaged on a new project. Many business analysts have a similar set that work just as well (in other words they have their own compass, I guess).

The theory behind this is that people are often wrestling with the symptoms they are experiencing rather than the root cause of the problem. So the first benefit a consultant can offer is to help the client clarify their own thinking.

(editors warning – this is a long article for a blog so grab a tea and come back, skip this long winded commentary or shift your brain into skimming mode before you continue)

I have written about my question compass several times in different contexts but I recently got asked how I use it at the start of a project.  So here is how it goes:

I say hello and ask what the problem is.  Then the client tells me what they think is going on. They say something and then I launch into my question compass, starting with “what do you mean” and then moving through the compass points until I know enough to be either scared or curious. 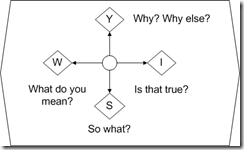 What do you mean?

Oddly enough, the more indirect my questioning (asking about any old noun or verb rather than really trying to burrow into the problem) the more my client seems to ponder the problem and suddenly realise they were solving the wrong problem. So I often know when to ask “How will things be different” because my client says “ah ha – I think the real issue is blah”.

Having annoyed my client a little by asking about a lot of nouns or verbs, you might hope that I would be able to jump to solution mode. But usually I start the grilling session again with “so why do you think people are having that issue?” or “why is doing that a good idea?”.

When I get a response I then ask “why else?”.  That may seem an odd question but I have found that, as the old saying goes, we often do things for two reasons – the right reason and the real reason.  So I like to get find out if there is a second reason like “our competitor is doing it”, “my boss wants it”, “that’s how we did it in my old job”.  These can all be valid reasons to consider something but are not always things that people feel like they can own up to.

At Toyota, apparently, they use the 5-why’s to get to the root cause of problems. So rather than ask why once they ask why a lot. I find this can also be useful, but people lose patience with me in an initial interview so I often only get two or three why’s in before I disguise them with another “what do you mean” or “how do you see that working”.  But I do concentrate on hammering away at the why.

Is that true (or are you lying to me)?

Once I have run out of energy with the why’s then I ask my client if they are lying to me. But people seem to react badly to that question so I have started to disguise it with more friendly versions:

So you can see that I am not really seeing if the client is being dodgy. Instead I am testing the boundary of the solution or problem.

Possibly not as bad as “are you lying to me” but not likely to win me many friends.

So again I have to disguise my question to make it sound nice. But if you ever call a good help desk then “so what” is about their third question.  They ask who you are, then what the problem seems to be … then they usually ask “how many people are impacted” in a corporate environment, or “what is it stopping you doing” in a customer one – and both these questions are really variants of “so what”.

The typical so what questions I ask are these:

Once I have finished all of this questioning (it can be done in anything from 15 minutes to 1 hour) then I think I have a pretty good grasp of what we need to do.

Then I can move to logistics, planning and getting others in for more investigation.

But on the other hand, other BAs and consultants have their own question compasses, so is mine the best or should you try theirs?

And on the other hand again, are these questions the right ones for all projects, or should we use different ones based on such things as whether the project is about, for example, consolidating and improving our processes, or launching an innovative new product?

I guess those are things worth more discussion, but I suspect you need a coffee break if you are still reading through my long-winded explanations.  So I will leave those questions for next time.

Leave a Reply to Focusing questions and project charters are great, but where do you start? « James King Cancel reply